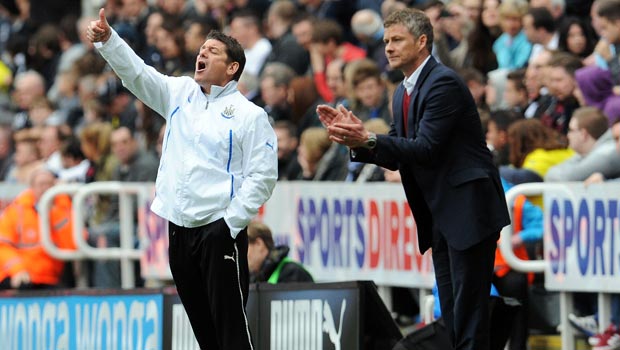 Cardiff City boss Ole Gunnar Solskjaer has targeted an immediate return to the Premier League after his side were relegated on Saturday.

The Bluebirds were beaten 3-0 by Newcastle at St James’ Park, but it was Sunderland’s 1-0 win away at Manchester United that sealed their fate.

They were relegated alongside Fulham after just one year in the top flight having failed to kick on after Malky Mackay’s sacking.

Owner Vincent Tan made the decision to sack the former Watford boss in December, and Solskjaer has been unable to turn their season around since his appointment in January.

Saturday’s defeat was their 21st in 37 matches in the Premier League, and they now sit rock bottom of the league with one game to go.

The Welsh outfit look likely to end the season bottom of the pile given they will face Chelsea on the final day, but instead of focusing on relegation, Solskjaer has his mind on an immediate return.

Speaking after their defeat at Newcastle, he said: “Before this year we had four seasons at the top of the Championship.

“Now we have gone down and taken a step back, next season will be about showing character and bouncing straight back.

“I have a contract,” Solskjaer added. “We have had meetings. Of course I am just planning for the next game right now, and then I will be planning forward.

“I always knew it was going to be a tough job but we have stuck at it.
We have been unlucky at times, and we have done well at times.

“My players are obviously very disappointed. With the effort they put in against Newcastle, they did not deserve to lose. They are a fantastic bunch who have given everything for the cause, but it was not enough.”