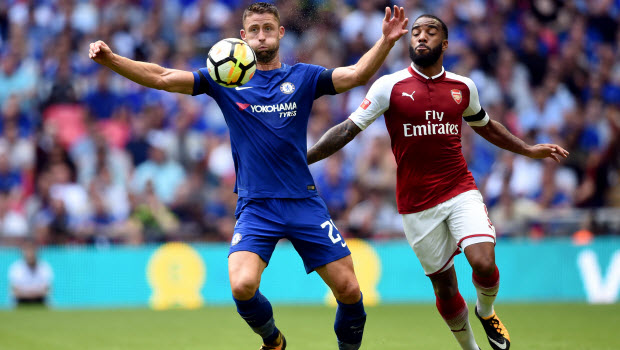 Chelsea defender Gary Cahill says it’s important to focus on the positives after a disappointing loss to Arsenal in Sunday’s Community Shield.

The Premier League champions had to endure a fast start from Arsenal but after weathering the storm they edged in front shortly after half-time courtesy of Victor Moses.

Arsenal battled back in the latter stages and scored the equaliser through summer signing Sead Kolasinac after Pedro was shown a red card.

The London rivals could not be separated at full time and the match had to be decided through a penalty shootout at Wembley.

Cahill was the only player to convert from the spot for Chelsea, who are priced at 4.00 to defend their Premier League crown, as Arsene Wenger’s men went on to lift the first piece of silverware this season.

The England international admits it was a disappointing afternoon but feels they can focus on some of the positives ahead of kicking off the new Premier League campaign against Burnley on Saturday.

Cahill told Chelsea’s official website: “I don’t see it as a setback, I see it as a disappointment because it was a game we wanted to win and an opportunity to win a trophy.

“I don’t care what trophy it is, if you finish your career with six it’s better to finish with seven.

“We let that slip, obviously penalty shoot-outs are a cruel way to end a game.

We’re disappointed but we need to brush it off and prepare for what’s going to be an important season.

“It’s hard to reflect positively because emotionally we’re disappointed, but if we’re trying to take the positives I felt we were in control of the game up until the goal and the sending off.”