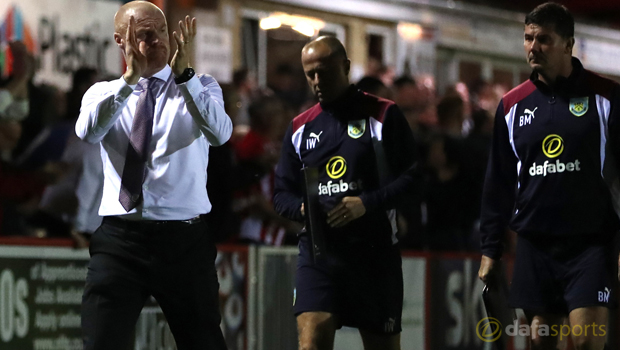 Burnley boss Sean Dyche has defended his side following their shock EFL Cup defeat to League Two Accrington on Wednesday.

The Clarets were expected to secure a comfortable victory away at their Lancashire neighbours but went down to a Matt Pearson goal late in extra time in the second-round tie.

Dyche used the game to give a number of his fringe players a chance to prove themselves, with striker Sam Vokes the only remaining starter from Saturday’s 2-0 win over Liverpool.

Despite introducing more first team stars as the game went on, they were continually frustrated by the stubborn Stanley defence, with goalkeeper Elliott Parish also making a string of fine saves.

Pearson then struck in the 120th minute to give Accrington their first-ever win over a Premier League side and it will be John Coleman’s men who head to West Ham in the third round of the competition.

Burnley will now look to Saturday’s daunting trip to Chelsea, with them currently 13.00 to take the points at Stamford Bridge, while the Blues are the 1.29 favourites and the draw is priced at 5.25.

Boss Dyche will more than likely welcome back the majority of the side that beat Liverpool last weekend, as he hopes to engineer another famous win in their bid to remain in the top flight.

Speaking after Wednesday’s defeat, the 45-year-old chose to take the positives from his side’s display, admitting that fortune had not been on their side at the Wham Stadium.

“Our performance was good but we couldn’t do enough to win it,” he said. “Credit to Accrington for staying resolute and riding their luck.”