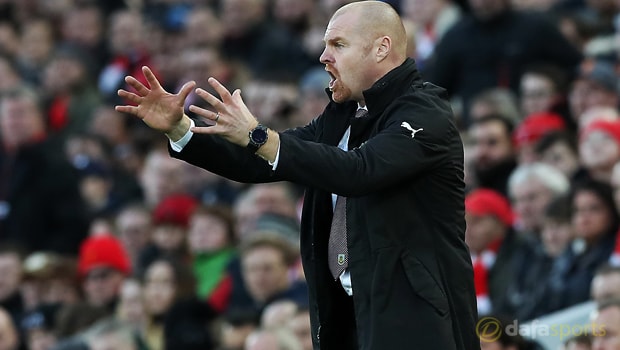 Burnley boss Sean Dyche hasn’t given up on grabbing an away win this season after leaving Anfield empty handed on Sunday.

The Clarets are yet to record a win on the road this season but Dyche felt they were unlucky to fall to a 2-1 loss at Liverpool in the latest round of fixtures.

Ashley Barnes gave Burnley an early advantage on Merseyside but Liverpool levelled in first-half injury-time with their first attempt on target, before Emre Can hit a second-half winner for the hosts.

Dyche refused to be downbeat after the match and he felt the performance deserved a result.

Burnley have five away games remaining, including a trip to Sunderland next weekend, and Dyche remains confident they can end their struggles away from Turf Moor before the current campaign comes to a close.

“I was just very pleased with the performance in general, but we’re still looking for that first win and we’ll keep working for it,” he told reporters.

He added: “Our fans were terrific again today because they could get disgruntled.

They stick with us unbelievably well and I think them for that because they are travelling everywhere and getting behind the team.

“If the players keep delivering that type of performance, things will break for us because our away performances have definitely got stronger.

“We are coming to places like Anfield and scoring and creating chances.

We’ve created three or four really big chances today, so there are a lot of good things and the mentality and the overall feel of the side and the link with the supporters is all intact and we have to take that forward into our last 10 games.”