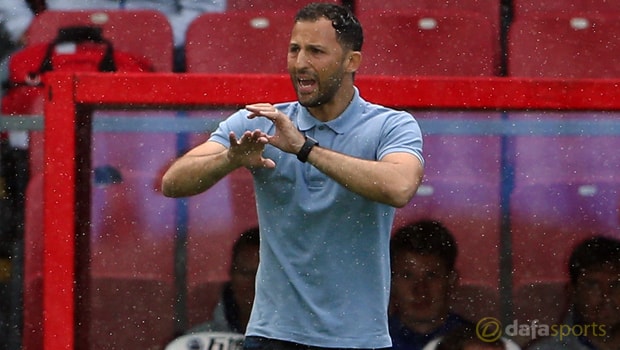 Schalke came from 4-0 down to draw 4-4 with Borussia Dortmund in Saturday’s Ruhr derby and coach Domenico Tedesco has described their comeback as ‘incredibly impressive’.

The Royal Blues went into the match at Signal Iduna Park having not tasted a Bundesliga defeat since September, but they appeared to be in real danger of ending that run when they fell four goals down inside the opening 25 minutes of the contest.

It wasn’t until the final 29 minutes that Schalke began to mount their comeback, as goals from Guido Burgstaller and Amine Harit reduced the deficit, while they were given real hope when BVB forward Pierre-Emerick Aubameyang was then shown a red card.

Daniel Caligiuri then got the visiting supporters believing when he made it 4-3 with four minutes remaining before Naldo’s stoppage-time leveller completed the unlikeliest of comebacks.

Tedesco conceded after the match that he did not believe his side could salvage anything from the match after they fell four goals behind and he has hailed the second-half performance of his players.

“If I’m totally honest, I didn’t believe we’d come out of here with a point at full-time given our first-half performance,” Tedesco said.

“Therefore, it feels even sweeter. From a footballing perspective, our second half was magnificent and I can only praise the players for that.

“Dortmund overran us to begin with. Every shot they had seemed to go in. It wasn’t easy to get over that quickly. The fact that we did that is incredibly impressive.”

The result leaves Schalke riding high in third position in the Bundesliga standings, five points behind leaders Bayern and they face a home match against bottom of the table Cologne next time out.

Schalke have not been crowned champions of Germany since 1958, but they are priced at 81.00 to end that wait this season.