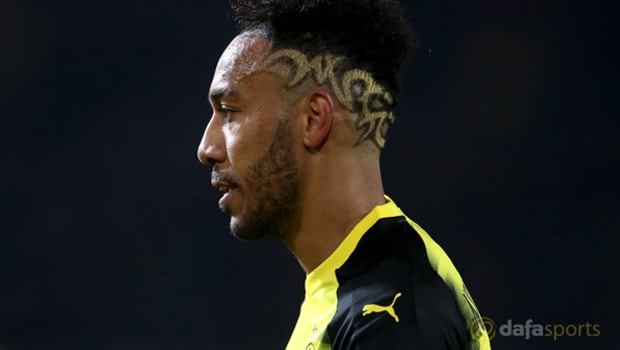 Borussia Dortmund insist they’ll have to problem in playing Arsenal target Pierre-Emerick Aubameyang while he remains at the club.

Arsenal have targeted the Bundesliga club’s top scorer as a potential January transfer in the wake of Alexis Sanchez leaving for Manchester United.

Dortmund coach Peter Stoger has confirmed that the Gabon international may be in the frame to face Freiburg on Saturday.

Aubameyang has missed Dortmund’s last two league games for disciplinary reasons, and his boss says he is now eligible for selection once more. “He’s made a good impression in training,” Stoger said.

“And if he continues to put in the work, he has qualified for the squad.”

The Gunners were reported this week to have had a bid in excess of £50m turned down by the German club for their prized asset.

Dortmund’s media director Sascha Fligge insisted that the club would not comment directly on transfer rumours, while Stoger revealed that there was no chance his striker would sit out this weekend’s game as a precaution against injury before the transfer window closes in midweek.

“The risk in training is as high as in a match. You never have security. And if someone’s fit, you will play him. No, this idea would not cross my mind,” he added.

The 28-year-old French-born striker has scored 98 goals in 143 appearances for Dortmund since moving from Saint Etienne in the summer of 2013.

He has been consistently linked with a move away from the Westfalenstadion during last summer’s transfer window and the current one.

Dortmund are 1.40 to defeat Freiburg at home on Saturday, while Aubameyang is 3.50 to net the opening goal.