Dortmund scores four as they see off Leverkusen

Posted by Olumide Akinnifesi on September 15, 2019 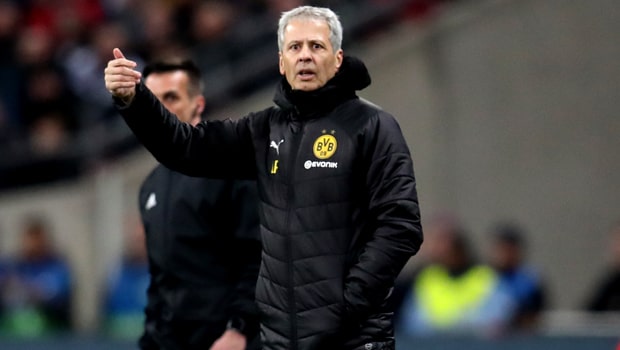 Borussia Dortmund bounced back from their disappointing loss to Union Berlin with a 4-0 win over Bayern Leverkusen at Signal Iduna Park on Saturday as Lucien Favre’s men look to put pressure on their rivals Bayern Munich and RB Leipzig after both sides played out a one-all draw.

The match started with a lot of excitement as both sides played brilliant game, thereby giving the fans something to cheer for. BVB drew the first blood as Paco Alcacer continued his excellent goal-scoring form after the international break following a superb cross from Achraf Hakimi.

Marco Reus doubled their tally after the start of the second half after a beautiful combination from Jadon Sancho and Paco Alcacer. Reus added a second of his own as Raphael Guerreiro added the icing on the cake to complete the rout and put the match beyond a reasonable doubt.

With Bayern and Leipzig sharing the spoils, Dortmund took the advantage to seal the much needed three points.

Once again, Lucien Favre’s side displayed a brilliant attacking style of play with a fluid link up and tons of chances created. Alcacer, Sancho, and Reus were ruthless and instrumental to the home side, thereby stamping the philosophy of Favre’s attacking style as they’ve always been.

Leverkusen’s defence was unable to withstand the waves of attacks and free-flowing football from Dortmund as the goals kept on pouring in. With that being said, the attack has always been a focal point for Favre’s men, but there is still room for improvement in their defensive strategy.

On the other hand, Peter Bosz’s side was able to carve out opportunities but was wasteful in front of goal as they took advantage of the huge gaps in the opposition defence. Against better opposition, Dortmund wouldn’t have had it their way. Overall, it was a very good performance which Favre will be relieved and pleased after their loss to Union Berlin.

Dortmund faces a tougher test against Barcelona in the Champions League this week. Dortmund are fancied at 3.02 to win Barcelona. While FC Barcelona are favoured at 2.30 to claim the victory.