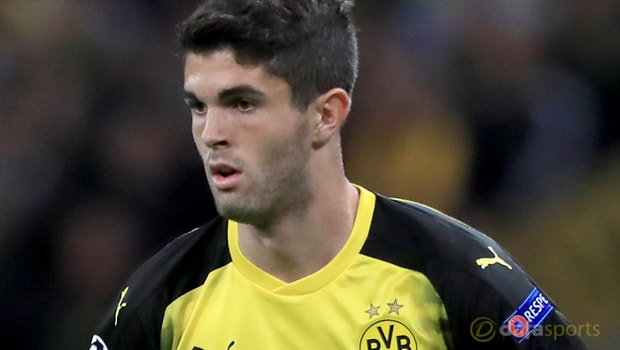 Christian Pulisic has been heavily linked with a move to the Premier League over recent weeks but insists he is not planning to leave Borussia Dortmund anytime soon.

The United States international is fast emerging as one of the hottest prospects in Europe after establishing himself as a first-team regular with BVB over the last two seasons.

The 19-year-old’s impressive displays have led to him being linked with a move to the Premier League, with Liverpool and Manchester United reportedly showing an interest in his services.

That speculation has gathered pace since former Dortmund player Pierre-Emerick Aubameyang swapped the Bundesliga for Arsenal during the January window, but Pulisic insists he is not planning to follow suit any time soon.

“Of course, the Premier League is an unbelievable league,” the winger told ESPN.

“You never know in football what can happen; right now, I’m focused with Dortmund. That’s that.”

“[The transfer window] was definitely kind of a whirlwind.

Every day, you hear something different in the media or whatever, something like that, but now that it’s over, our team has been having kind of a rough go of things lately.”

Pulisic has played in all but two of Dortmund’s Bundesliga games to date this term and he is in line to feature once again when Peter Stoger’s side play host to Hamburg at Signal Iduna Park on Saturday.

Dortmund are unbeaten in their last six Bundesliga games and they are priced at 1.36 to secure all three points from Saturday’s contest, while Hamburg are available at 9.50 and the draw is on offer 5.00.