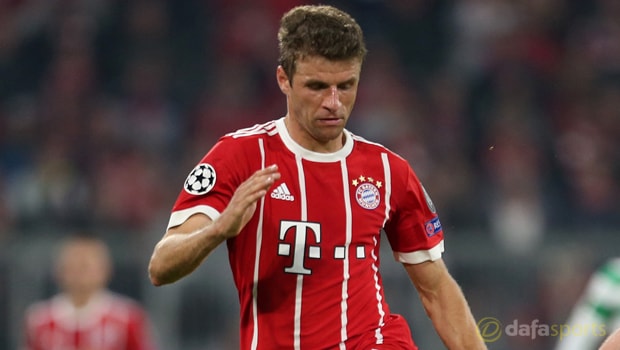 Bayern Munich manager Jupp Heynckes has heaped praise on Thomas Muller after his goal in the 3-0 Champions League win over Celtic.

Heynckes returned to Allianz-Arena for a fourth spell as manager after the club decided to axe Carlo Ancelotti, and the 72-year-old knows all about Muller having worked with him in his previous spell in charge of the Bavarians.

The 28-year-old Germany international found himself down the pecking order at times under Ancelotti but is a big part of Heynckes’ plans for the season ahead.

He said: “Thomas played in the same position on Saturday and played pretty well, but he’s been working really hard.

He not only scored the first goal, but he worked hard and ran a lot. He helped in defence as well.

“Today I saw the old Thomas Muller, the one that I know.

“But this is all necessary, especially from the well-established players and leaders in the team.

He’s the captain of the team so, of course, I’m happy about his form.”

Bayern head to Hamburg in the Bundesliga on Saturday as they seek to keep the pressure on league leaders Borussia Dortmund, who travel to Eintracht Frankfurt earlier in the day.