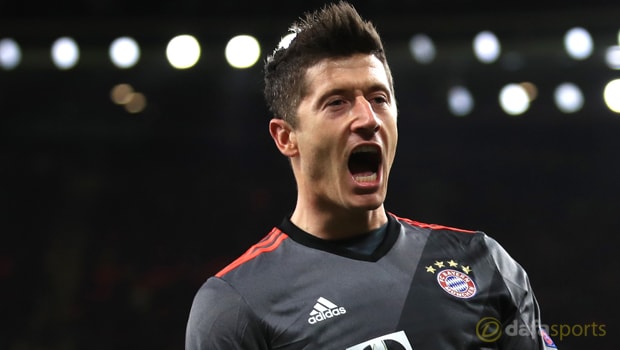 Robert Lewandowski’s agent has said Bayern Munich coach Carlo Ancelotti didn’t give the striker his support in his bid finish as leading goalscorer in the Bundesliga last season.

Bayern won the title by 15 points from Leipzig but it was Pierre-Emerick Aubameyang of third-placed Borussia Dortmund that pipped Lewandowski in the goalscorer’s race.

Aubameyang netted a brace on the final day of the season, including a last-minute penalty, as Dortmund defeated Werder Bremen 4-3.

Lewandowski meanwhile returned a blank in Bayern last-day 4-1 over Freiburg at home, ensuring Aubameyang pipped him by one goal.

Lewandowski, 28, racked up his second successive 30-goal campaign at Bayern, taking his tally to 77 goals in 96 league appearances for the Bundesliga champions but his agent suggests he did not feel his manager had weighed-in behind him in his bid to be top-scorer.

“Robert told me there was no support from the coach or an appeal to support him in the final game to become top scorer,” Maik Barthel told kicker.

“He was really disappointed, like I have never experienced before.” The prestigious Torjagerkanone, awarded to the Bundesliga’s leading marksman, was clearly something the Poland international had set his sights on winning again.

Lewandowski has been repeatedly linked with a move to European champions Real Madrid in the past and his agent says the player felt Ancelotti, a former Madrid boss, could have been more supportive after the title had been wrapped up.

“Robert hoped the team and the coach would proactively support him to win the Torjagerkanone,”

Barthel said. Bayern are 1.14 to win the Bundesliga next season, with Lewandowski’s former club Dortmund 6.50.