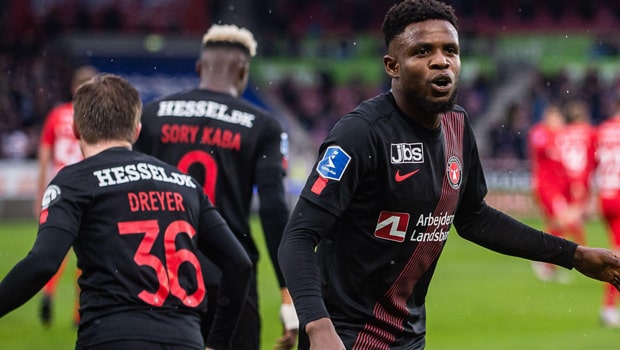 Onyeka who made 123 appearances for FC Midtjylland becomes Brentford’s first Premier League signing although his transfer fee is undisclosed it was revealed that he signed a five-year deal.

Furthermore, the midfielder has since passed a medical and has received a work permit. He arrived in the UK on Monday but will still be quarantined before joining the squad.

“We think he’s a strong addition to the squad, We are looking forward to working with him. He is a very dynamic player. Frank plays as an eight in our system, he is very good at getting from box to box and will be valuable to us when we don’t have the ball. He has come from the Danish league and was one of the best midfield players in that league, we think he has the potential to develop further.” Bees boss Thomas Frank said.

Brentford got promoted after defeating Swansea in the championship final at Wembley in may which ended their 74-year wait for a return to the top flight.

Meanwhile, Andros Townsend has joined Everton on a free transfer after his contract with Crystal Palace ended.

The former England winger joins his former manager at Newcastle Rafa Benitez at the Goodison Park. The 30-year old was capped 13 times by the Three Lions started his careers at Tottenham before joining Newcastle in 2016.

Meanwhile, Asmir Begovic also joined Everton on a 13-month deal with an option of extension. The 34-year joins from Championship side Bournemouth and he will provide backup for Jordan Pickford.

Begovic was also one of Benitez’s trusted men during his days as manager of Newcastle United. Benitez was the manager at the helm of affairs at Newcastle between 2016 and 2019.