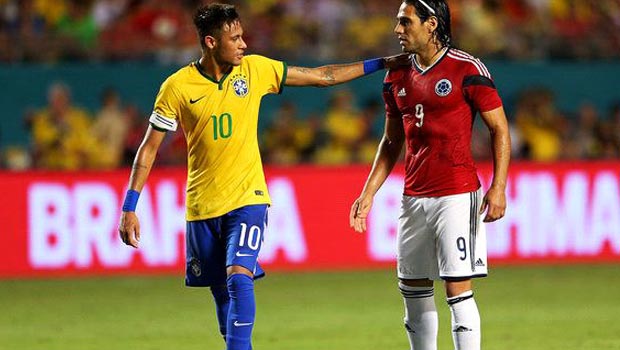 Brazil secured a 1-0 victory over Colombia on Friday night as they look to get back on track after a disappointing World Cup on home soil over the summer.

The Selecao opted to hand a surprise recall to Dunga, who led the team out for the first time since his return to the helm.

Barcelona forward Neymar scored the only goal of the fixture when he whipped home a wonderful free-kick in his first game for the national side since suffering a broken vertebra.

Colombia played almost half of the tie with 10 men after Fiorentina winger Juan Cuadrado was sent off for a second bookable offence on 49 minutes.

Los Cafeteros were able to hand new Manchester United who are valued at 17.00 to win the league loan signing Radamel Falcao a 13 minute run out at the end as he continues to work his way back from a season on the sidelines with a serious knee injury.

However, his presence was not enough to change the overall result of the tie in Neymar’s first game as the nation’s captain.

The two South American sides did not pull any punches in what was a physical match, although it was Brazil who looked the better.

Dunga’s men carved out the more clear cut chances and Diego Tardelli had an effort ruled out for offside in the first half.

The 50-year-old who is in charge of Brazil for the second time in his managerial career believes that it was vital to get the win and he hopes that it will help the squad to grow in confidence.

Dunga said: “It is always good to win, especially with the criticism after the World Cup, some of which was very strong.

“This will help the players to regain self-esteem and confidence.”