Posted by Fred McKinley on September 6, 2014 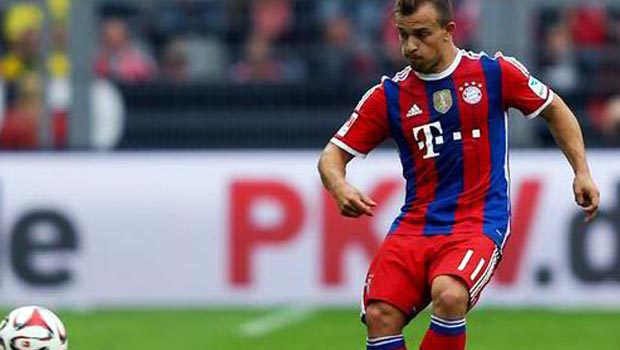 Bayern Munich forward Xherdan Shaqiri has revealed that he was the subject of a bid from Liverpool over the summer but his parent club refused to allow him to leave.

Shaqiri joined the Bavarian outfit in 2012 from Basel for a fee rumoured to be in the region of €12million, although he has struggled to impose himself as a regular.

The Switzerland international sits behind Arjen Robben and Franck Ribery in the pecking order at the Allianz Arena and has been restricted to just 45 appearances since making the move.

The 22-year-old has collected two Bundesliga titles, the Champions League and two DFB-Pokal titles since joining the German side.
Despite not playing regularly a number of top sides across Europe have been expressing an interest in securing his services and offering more game time.

The forward claimed that Liverpool lodged a bid for his signature prior to his exploits for Switzerland at the World Cup in Brazil, but Bayern who are priced at 2.50 to win the Champions League rejected their approach.

Shaqiri said: “Liverpool made a bid for me before the World Cup but Bayern put their foot down and told me, ‘We’re not going to sell you’.

“My contract runs until 2016 and I could possibly extend it. I will consider my decision during the winter break.”

The Swiss insists that for the time being his main focus is on Monday’s Euro 2016 qualifier against England and he admitted that he is wary of a few fresh faces called up by the Three Lions.

He added: “I expect England to come over with a lot of young players who aren’t yet so well known. They will want to repair the damage after not doing well at the World Cup finals.

“They will come over to Switzerland looking to win. But we will play our normal game – and we’ll be going for victory too.”