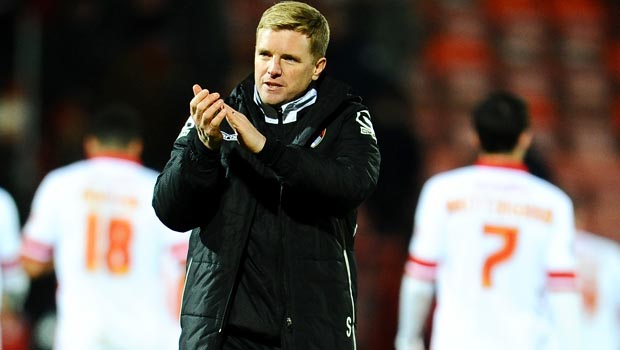 Bournemouth boss Eddie Howe has urged his players to show everybody “we are a good side” when they face Liverpool in the quarter-finals of the Capital One Cup at Dean Court on Wednesday night.

The Cherries go into the game flying in the second tier of English football as they sit top of the Championship table on goals scored – ahead of Middlesbrough – on 39 points from 21 games and are currently on a 12-match unbeaten run.

Included in that run is the scalp of Premier League strugglers West Brom in the previous round of the League Cup on October 28 and Howe is hoping his free-scoring side can maintain that level of performance in front of a wider audience against Brendan Rodgers’ side.

Liverpool won 2-0 in an FA Cup tie at the same venue last season, but the Reds’ fortunes have declined since then as they crashed out of the Champions League last week before Sunday’s 3-0 at Manchester United that left them down in 11th spot in the Premier League table.

Howe accepts that the Merseysiders will still pose a huge threat to his side, but he is looking for the Cherries to impose themselves on the game which they go into on the back of Saturday’s 5-3 home win against Cardiff.

He said: “I would love the players to do themselves justice and show everybody, if people need confirmation, we are a good side.

“It’s one game and the first time we have been in the quarter-finals, so it’s hopefully a game where we can relax and attack rather than think too much of the consequences of defeat or victory.

“We are in a good place, enjoying the games and the challenges.”

Howe added: “I think it is a showcase for the club and a showcase for the team. If we can perform as we have done in the league and give a really good account of ourselves and hopefully everyone can see our philosophy, then we will take that.”