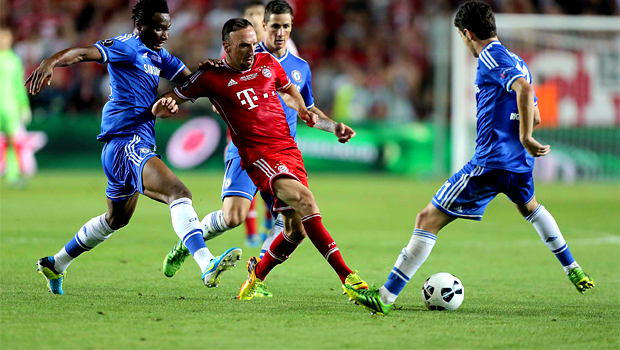 Bayern Munich and Chelsea will meet in Uefa Super Cup with Jose Mourinho and Pep Guardiola set to renew their rivalry, although Spaniard insists it is all about the players.

The Champions League winners Bayern Munich and Europa League champions Chelsea will come face-to-face at the Eden Arena in Prague.

Bayern boss Guardiola was involved in some heated encounters with Blues manager Mourinho during their time in Spain when they were in charge of Barcelona and Real Madrid respectively.

Guardiola claimed 14 trophies during a four-year stint the Catalan club before taking a year-long sabbatical at the end of the 2011-12 season, joining Bayern over the summer.

The boss of the Bavarian outfit has previously collected the Uefa Super Cup title with Barcelona in 2011, whereas the Portuguese will lead a team out in the showpiece tie for the first time.

The 42-year-old has made it clear that the rivalry between himself and the Premier League boss should be ignored and it is a night for the players to enjoy and try to win some silverware.

Guardiola said: “We’re here for the players, not the coaches.

“Millions of people around the world will watch the game, not the coaches.

“I have a great respect for him, but on Friday I will try to win and so will he too.

“He is always very, very good with quick counter attacks. He is a master at that and everybody knows he is an excellent, excellent trainer.”

Chelsea’s new signings Willian and Samuel Eto’o have not linked up with the 16-man squad that includes David Luiz, who is yet to feature this term.

Bayern midfielder’s Bastian Schweinsteiger and Javi Martinez will face late fitness tests ahead of the fixture.