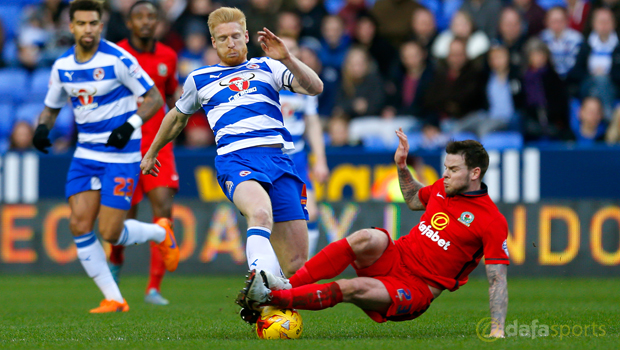 Danny Guthrie believes Blackburn remain more than capable of achieving their pre-season goal of finishing in the play-off places.

Despite a mixed start to the campaign, which eventually cost Gary Bowyer his job, Rovers currently find themselves unbeaten in their last eight and have kicked on since the appointment of Paul Lambert.

Sunday sees the Lancashire outfit take on Reading and despite sitting 12th in the table, a victory at the Madejski will see them rise to just three points short of the top six.

It promises to be a difficult game though, especially as Reading are set to welcome back manager Brian McDermott to the dugout following his return to the club as Steve Clarke’s replacement earlier this week.

Rovers are currently priced at 3.40 to win on Sunday, with the draw at 3.10 and the Royals installed as the 2.30 favourites.

Although they face leaders Middlesbrough on Boxing Day, Blackburn then have an extremely winnable trip to bottom club Bolton.

It means a decent run could see Guthrie and co stay in contention for the play-off places and they will be full of confidence following their recent form.

The experienced midfielder admits the whole squad are delighted with their progress in recent weeks and believes their goal of a top-six finish remains a definite possibility.

“It’s been our aim all season,” Guthrie told Radio Rovers. “We have probably drawn too many games, but since the new manager has come in, the lads have done really well and we’ve all said that we have to push for the top six.

“We have put ourselves in a position that we can, we cannot drop our standards.

“This period coming up with loads of games is really pivotal for us as it can go one way or the other and we’re really keen to push on.”