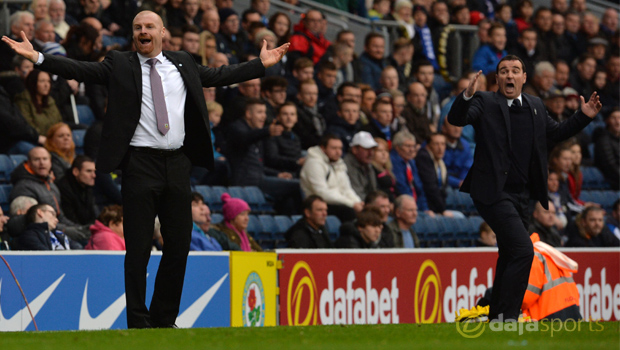 Gary Bowyer said Blackburn’s 1-0 derby defeat against Burnley at Ewood Park on Saturday was “a massive sickener” given the way his side dominated for large spells of the game.

The Rovers chief was hoping to get the better of their East Lancashire rivals and secure a first win in three Championship outings in order to pull away from the relegation places.

Top scorer Jordan Rhodes had four chances to score for Rovers, while Tom Lawrence spurned the best opportunity in the second half when he blazed his shot over the bar from close range with just Burnley goalkeeper Tom Heaton to beat.

Heaton also denied Shane Duffy while Craig Conway saw a rasping effort come back off the crossbar as Rovers failed to find an elusive goal.

At the other end Scott Arfield fired in one of the Clarets’ two shots on target in the entire game on 63 minutes to snatch his side all three points.

The result leaves Rovers in 18th position and just two points clear of the bottom three.

Afterwards a disappointed Bowyer told the club’s website: “To perform the way we have done in our local derby, and to create the number of chances that we have, it is a massive sickener.

“We have had enough chances to have won more than one game but we haven’t been ruthless enough in front of goal.

“In the second half we carved them open with the football that we’ve played and Tom [Lawrence] and Jordan [Rhodes] have had two great opportunities. Then we have conceded a soft free-kick and we have not defended the second ball on it. So it is hugely disappointing.”

Blackburn, who are 7.00 to be relegated, will travel to face Leeds at Elland Road on Thursday and Bowyer is looking for an instant reaction against Steve Evans’ side.

He added: “We’ve got to turn it around very, very quickly and the beauty is we’ve got Thursday to do that.”