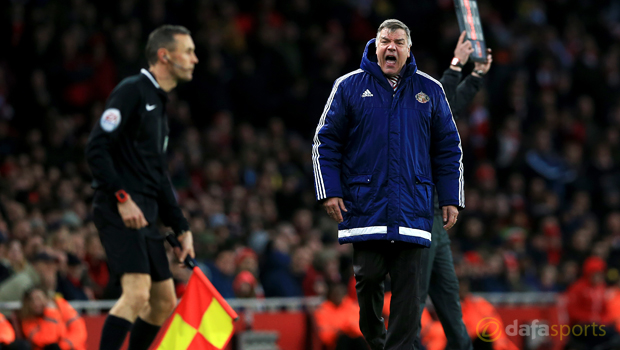 Manager Sam Allardyce feels Sunderland must score the first goal if they are to claim the spoils in Wednesday’s big Premier League clash with Swansea.

The Black Cats head into the Liberty Stadium encounter sitting in 19th place in the table and with only Aston Villa below them.

Newcastle United are one place above while the Swans are four points and two places better off than the Wearsiders after 20 games of the season.

Allardyce replaced Dick Advocaat earlier in the campaign but has yet to see a turnaround in results, with the north-east outfit having lost three league games in a row before beating Villa last time out.

The Villans look doomed to relegation but there are probably six or seven other teams who are still looking over their shoulders at the drop zone and need to put a run together to move up the table.

And, with that in mind ‘Big Sam’ knows that taking a point home from south Wales is the minimum requirement in midweek.

“There’s games that you look at where, for me, they’re not lose,” he said. “If you lose those fixture, then you have to make up those three points against the top boys.”

Sunderland’s main problem since the former West Ham chief joined the club has been the fact that they have yet to pick up a single point when conceding first.

It is something that has been frustrating the 61-year-old tactician over the past few months and one that he hopes is not an issue against the Welsh outfit.

And the much-travelled coach insists that Sunderland, who are priced at 4.75 to win with Swansea on offer at 1.80, must make sure they find a way to take something from the match to hang onto Swansea’s coat-tails.

“If we can’t win, make sure we don’t lose, so at least at the end, Swansea are no further ahead of us than they are today,” he continued.