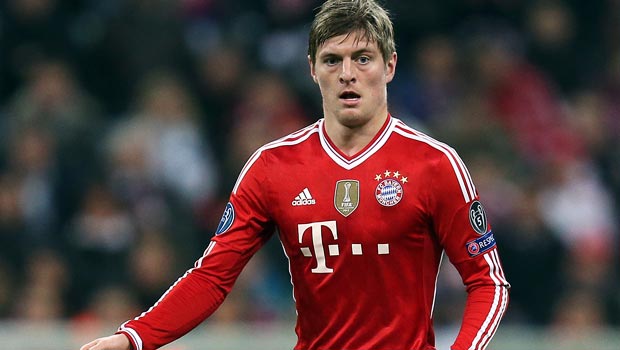 Bayern Munich midfielder Toni Kroos is keen to join Manchester United as his contract renewal talks remain in stalemate ahead of the two sides’ Champions League quarter-final decider on Wednesday.

Kroos has reportedly told some of his Bayern and Germany team-mates that he is determined to make the switch to Old Trafford in the summer, despite his club stating they would ensure he honoured the final year of the current deal which expires in 2015.

The 24-year-old playmaker, who should line up against United on Wednesday in the second leg of quarter-final clash, has been attracted by the lure of a huge contract and the chance to be a main man.

United are willing to offer £40million to the German champions and wages that would more than treble the player’s current salary at the Allianz Arena.

Kroos, whose contract renegotiations with Bayern have stalled, could get up to £200,000-a-week at Old Trafford – where he helped the holders grab a 1-1 draw last week.

Bayern are still the big favourites to progress and can do so with any victory in the second leg where they are 1.23 to win in the 1X2 betting on Wednesday.

United are available at 9.70 to pull off a shock in Germany while a draw, which could favour the Premier League champions if it is a high-scoring affair, is available at 6.50.

United boss David Moyes sees Kroos as central to his rebuilding plans and, despite their disappointing season and the strong possibility they won’t be in the Champions league next season, the figures on offer appear to have turned the player’s head.

Kroos has told team-mates that he would rather be first choice at United than play second fiddle to Bastian Schweinsteiger for another season.

Moyes needs a signing of the magnitude of Kroos to make a huge statement of intent in his rebuilding of the United squad left to him by Sir Alex Ferguson.