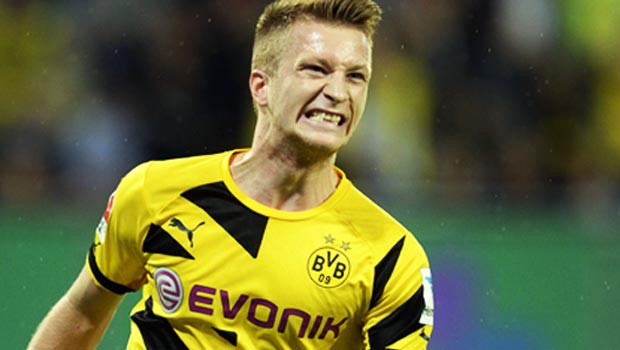 Bayern Munich have discussed the possibility of another raid on Bundesliga rivals Borussia Dortmund to sign Marco Reus, according to chairman Karl-Heinz Rummenigge.

The champions have completed deals for former Signal Iduna Park favourites Mario Gotze and Robert Lewandowski in recent seasons and now hope to activate a buy-out clause of 25million euros in Reus’s contract – which expires in June 2017 – that comes into effect next year.

In an interview with Sport1, Rummenigge said: “If a German international has an exit clause and his contract is running out, Bayern is obliged to think about him. With Marco Reus his release clause is known.

“Whether we deal with it, I cannot seriously predict. We’ve talked too little internally about the subject.”

Reus still has three years to run on his contract with BVB and Rummenigge said he expected a long and difficult fight to try and sign the 25-year-old.

Recent reports suggest Premier League top-four chasers Liverpool are also considering an audacious attempt to sign the midfielder, who has hit double figures for goals in two seasons so far for the Bundesliga title-hopefuls.

Rummenigge also said Dortmund are unlikely to let their prize asset leave for their main domestic rival without a scrap.

“There are many great clubs from other countries who would be interested in signing Marco Reus,” he added.

“Of course they [Dortmund] will try to extend his contract. But at the end of the day the player will decide what he wants.”

Bayern Munich are currently priced 4.50 to win this season’s Uefa Champions League and Borussia Dormund are quoted 19.00 in the outright betting.