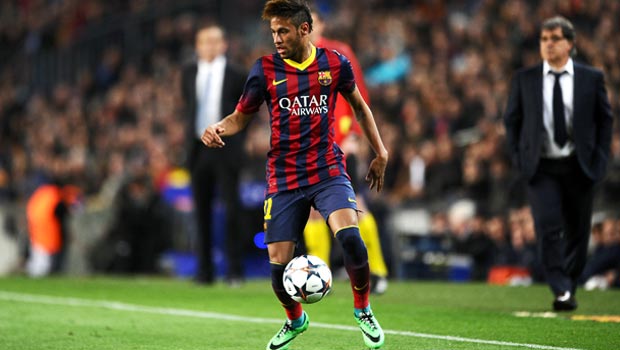 Barcelona boss Gerardo Martino believes that Neymar’s goal in the 1-1 draw with Atletico on Tuesday night will help to silence his critics.

Neymar has come under great scrutiny during his debut season for the Catalan outfit, with a lot of unwanted attention over his true transfer fee.

The Brazilian has not quite hit the ground running but he has enjoyed a number of stand-out performances in what has generally been a positive campaign.

The home side had to fight back in the first leg of the Champions League tie with Atletico after Diego rifled in the opener on 56 minutes.

The 21-year-old levelled the scores when Andres Iniesta slid a perfectly weighted ball through and he bent it beyond an outstretched Thibaut Courtois and into the far corner.

Martino admitted that it has not been easy for the summer signing of late, especially as he was sidelined with an ankle injury in February.

Martino said: “Obviously, for any player in his situation, where he was trying to recover his level working really hard, this (the goal) is a really important moment.

“And apart from this, he made a great match, and of course, this goal helps us, but especially him.”

The main worry for Martino will be the injury picked up by defender Gerard Pique, who had to leave the pitch with a hip problem in the first half, and scans have revealed he will be out for a month and will miss the second leg in Madrid.

He continued: “(Pique) asked to be subbed off after he noticed pain in his hip due to a pelvic contusion.

“Marc Bartra came on in his stead. (Pique) will undergo additional tests to determine the extent of the injury.”

Diego Simeone also lost a key player in the tie when Diego Costa limped off with a hamstring problem, he is certainly expected to miss the weekend’s game with Villarreal but could recover in time to play at the Vicente Calderon next Wednesday.