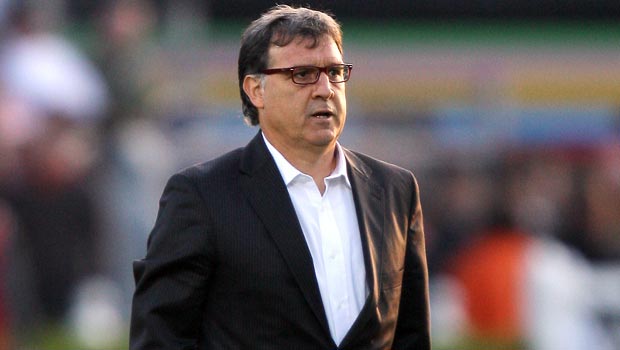 Gerardo Martino has called on his Barcelona players to use the boost from their Champions League last-16 win against Manchester City to get their La Liga bid back on track.

The Catalan giants, who won 2-0 at the Etihad Stadium in the first leg three weeks ago, sealed a 4-1 aggregate win against Manuel Pellegrini’s expensively-assembled Premier League side after second-half goals from Lionel Messi and Dani Alves helped them to a 2-1 second leg win at Camp Nou on Wednesday.

Barca’s win against City’s 10 men after Pablo Zabaleta’s red card 12 minutes from time, was a far cry from their recent domestic form as two defeats in their last three games has resulted in them dropping to third in the table, four points adrift of leaders Real Madrid.

Their stuttering form has also resulted in question marks over their capability of overcoming the likes of Bayern Munich in order to win the Champions League title this year.

However, Martino feels his players can take a lot of positives from the two-legged success against City and use it to spur them on.

“Under any circumstances we need to be very confident from now on after going through to the quarter-finals against such a difficult opponent,” the head coach said.

“It’s not only the fact we went through but how we did it. So we are strong and confident although sadly we need this to transfer into La Liga now.”

On the win against City, Martino added: “Obviously in a team such as Barcelona we must always expect this kind of commitment – commitment to the game, to the situation, and to overcome the rival’s style of play.

“This sort of commitment is really satisfying.

“Everything we expected from our players they did; possession football, good passing – that’s all normal.

“But we understood we are in a difficult moment so it was vital that we went through, especially given the quality of our rival.”