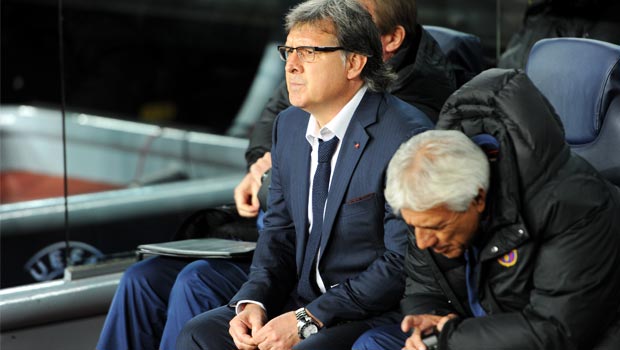 Barcelona coach Gerardo Martino is doing his best to not let the recent troubles off the pitch affect the players and their ongoing pursuit of silverware this season.

The Catalan giants have been hit with a 14-month ban on transfers following a breach of FIFA rules on the international transfers of players under 18.

It has seemingly opened up a huge can of worms with every man and his dog having a say on the penalty, while Barca president Josep Maria Bartomeu has described the ban as a “huge injustice” and is set to launch an appeal.

The latest trouble comes on the back of charges of tax fraud over the transfer of Neymar and while there has been talk of conspiracies, Martino is desperately hoping he can keep the players’ minds focused on matters on the pitch.

“If you start to think like that – about conspiracies – it’s difficult to work in football,” Martino said.

“It’s true that there are many comments on this but I hope many of them have no level of truth. What strikes me is that these things happened at very crucial moments.

“We don’t stop ignoring the situation. The best we can do is to focus on what lies ahead and allow those in charge to resolve this issue. There’s a lot which needs to be said.

“We are one of three teams in Europe who can still win three major competitions. I’d rather not be thinking bad things about next season when we are still immersed in this one.

“We must not divert attention from the football we have left this season.”

Barcelona are currently priced as the 1.70 market leaders to defend their La Liga crown, lying in second place, a point behind leaders Atletico Madrid, while they are the 1.85 favourites to win the Copa del Rey at the expense of Real Madrid.

A 1-1 draw in their Champions League quarter-final first leg at the Nou Camp was not the ideal result ahead of a trip to the Vicente Calderon but they are behind only Bayern Munich at 2.65 and Real at 3.40 in the outright betting at 6.50.