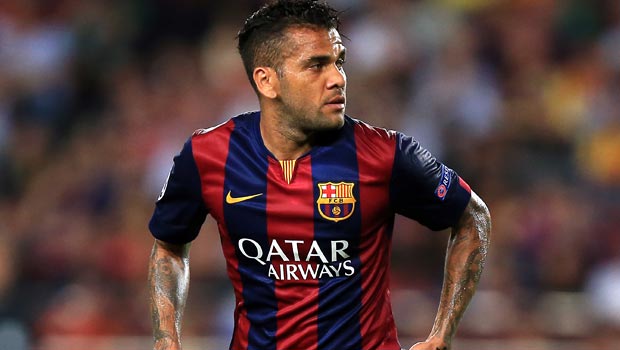 Barcelona defender Dani Alves has claimed he will be moving to the Premier League next season.

The Brazil international has been at the Nou Camp since 2008 and is one of the best full-backs in world football but his time with the Catalan giants looks set to come to a close at the end of the current campaign.

The 31-year-old has refused to elaborate on where he will be plying his trade for the 2014-15 season, or why he has decided to leave Barca, but he is intent on making the move to the Premier League.

Brazilian newspaper O Globo quoted Alves as saying: “I am moving to England next year. I am going to play in the cradle of football. This will be my last year at Barcelona.”

Alves, who joined Barca from Sevilla after helping them to win two UEFA Cups and the Copa del Rey in a successful six-year spell, has been linked with several Premier League clubs in the past six months.

Liverpool were rumoured to be interested in the summer but opted to bring in Alberto Moreno from Sevilla instead, while Manchester United have also been mentioned as possible suitors.

There will be no shortage of top clubs willing to sign the experienced defender next summer, with Manchester City, Chelsea and Arsenal also likely to be in the running.

Alves, who has won four La Liga titles, the Copa del Rey, the Club World Cup twice and the Champions League twice during his time at Barca, remains first choice at the Nou Camp but faces competition from the likes of Douglas, Adriano and Jordi Alba for a starting role.

Alves will hope to be involved when Barca go to Rayo Vallecano on Saturday in La Liga – a game his side are 1.26 to win with Vallecano 9.51 outsiders and the draw is on offer at 5.84.