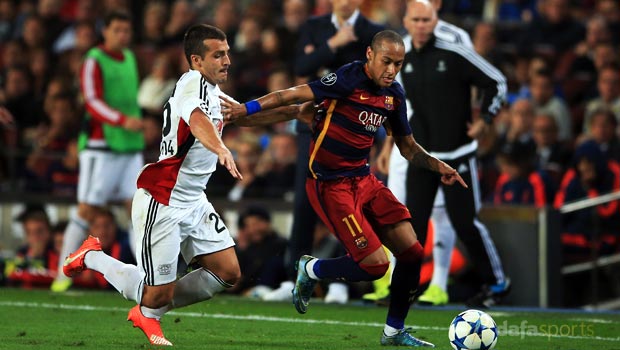 Barcelona boss Luis Enrique has urged the media and fans to lay off Neymar after his below-par showing so far this season.

The Catalans have not been at their best this term and now have to do without their talisman, with Lionel Messi out for around two months with a knee problem.

In his absence, the spotlight has fallen on the likes of Neymar and Luis Suarez to pick up the slack as the Spanish giants look to defend both their La Liga crown and their Champions League title.

Barca are second in the Spanish top flight at present but have not dominated teams as expected and they suffered a 4-1 drubbing away at Celta Vigo last week.

They looked in trouble in Tuesday’s Champions League clash with Bayer Leverkusen as well when the Bundesliga side took the lead through Kyriakos Papadopoulos on 22 minutes.

And that is the way it stayed until two goals in two minutes late on in the piece gave the hosts a 2-1 win at the Nou Camp.

The home faithful showed their displeasure at times during the match, with Neymar the subject of their boos and whistles.

And Enrique has been quick to defend the Brazil international hit-man who, he feels, is being unfairly singled out for attention with Messi now out of the equation.

“The media has somehow created the idea that Neymar must do something extra now that Messi is injured, but it is not like that,” he said.

“It is not like the other players can just relax when Leo is there. We are a team and everybody always has to give 100 per cent.”

There will be no rest for Barca, who travel to face Sevilla on Saturday and can be backed at 2.00 to take care of Los Rojiblancos with the hosts on offer at 3.60.