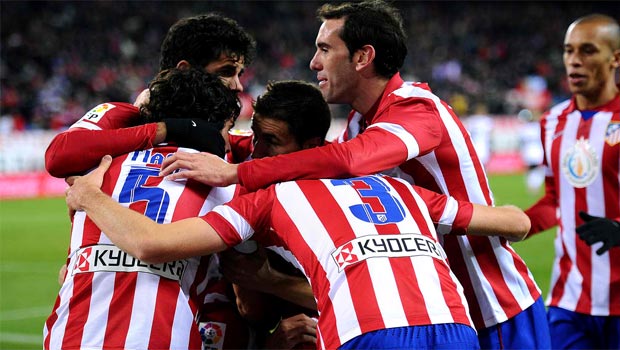 Diego Simeone’s side have 43pts at present, the same as Barcelona, but have scored one less goal, so it will be on a mission to score as many as possible this evening.

Barcelona are away at Getafe tomorrow, so Atletico can sit proudly on top for nearly a day if successful at the Vicente Calderon.

Like their Catalan rivals, the Madrid club have a one hundred per cent home record, having recorded a perfect eight out of eight victories, including a 3-0 win over Levante’s more illustrious neighbours Valencia last week.

They will take nothing for granted against Levante though, as they themselves have come through a bad patch to beat La Liga new boys Elche 2-1, while a 4-0 thumping of Recreativo Huelva in the Copa del Rey round of 32 will have done their confidence no harm.

Facing up to Diego Costa and co though is a different ball game altogether, but midfielder Jordi Xumetra, who misses the game through suspension, believes there is some hope.

“We had a bad month but we beat Elche in search of a turning point and kept the run going in the cup by scoring four goals and turning the tie around, and we are gaining in confidence ahead of Saturday,” he said.

“It will be a very difficult game for us, especially because it’s at their stadium, but Levante are capable of anything.”