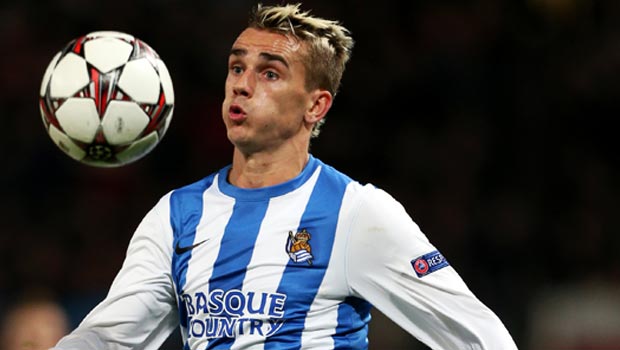 Atletico Madrid have confirmed they have agreed a deal to sign Real Sociedad winger Antoine Griezmann.

The France winger played his part in the World Cup this summer in Brazil but was unable to help his side beat Germany in their quarter-final clash.

Griezmann was linked with Monaco, Paris Saint-Germain, Tottenham, Arsenal and Liverpool this summer but Atletico have won the race for his signature following a bid in the region of £30million.

Confirming the deal, Atletico announced on their official website: “Atletico Madrid and Real Sociedad have reached an agreement for the transfer of Antoine Griezmann.

“The young French footballer will sign a contract with our team once he passes his medical.”

Boss Diego Simeone has already lost Diego Costa, David Villa, Filipe Luis and Thibaut Courtois this summer but the signing of Griezmann will at least give them more of a chance of defending their La Liga title.

Croatia striker Mario Mandzukic has also joined the club and the pair could form a formidable partnership next season.

Griezmann scored 53 goals in his 202 games for Sociedad and the club have thanked him for his service.

In a statement, Sociedad said: “The player has the permission of Real Sociedad to undergo his medical in Madrid.

“Real Sociedad want to thank Antoine Griezmann for the professionalism and dedication he has shown during his time at our club, and at the same time wish him the best for the future.”