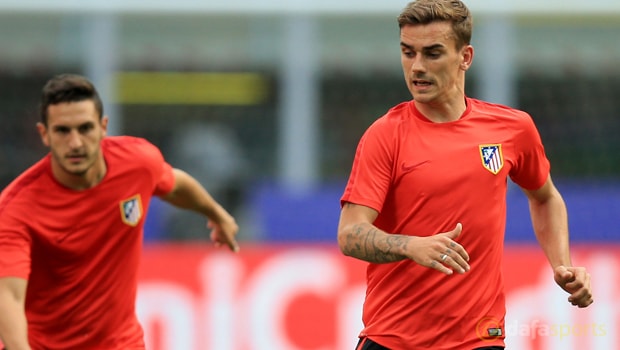 Atletico Madrid are hopeful that Antoine Griezmann can overcome a foot injury sustained while on international duty with France ahead of Saturday’s showdown with city rivals Real Madrid.

The 25-year-old had to leave the field at half-time in Friday’s 2-1 victory over Sweden after suffering a knock to his foot.

Griezmann, who boasts six strikes to his name in the league so far this season, has subsequently been ruled out of Tuesday’s friendly clash with Ivory Coast and immediately returned to the Spanish capital for tests.

Atletico are keen to have the former Real Sociedad man back and get him fit in time for Saturday’s derby with Real at the Vicente Calderon.

Los Colchoneros announced that the scans provided a boost to their hopes of having last season’s top-scorer available but he will need to prove his fitness after rejoining the squad for training later this week.

A statement from the club read: “Antoine Griezmann underwent medical tests on Monday in Fremap Majadahonda. After undergoing the tests, the medical report confirms ‘a good evolution of his traumatic injury’.

“The Frenchman will do rehabilitation work and physical therapy in the coming days to progressively allow him to rejoin training.”

Saturday’s clash with their city rivals is already shaping up to be a key match at this early stage of the season following some disappointing performances in La Liga.

Simeone’s men currently sit fourth, having tasted defeat twice in 11 fixtures, while Los Blancos are unbeaten and leading the way at the top of the table with a six-point advantage over Saturday’s hosts.

Atletico are priced at 2.40 to claim victory on Saturday, while Real Madrid can be backed at 3.10 and the draw is available at 3.30.