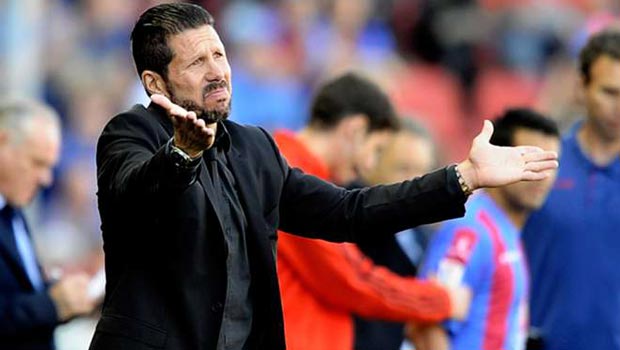 Atletico Madrid boss Diego Simeone refused to be downbeat after his side’s 2-0 loss at Levante on Sunday.

Atleti hold a three-point advantage over Barcelona and are four points clear of Real Madrid, who have a game in hand at the top of the table.

Simeone’s side could have all but wrapped up the title with a win at Levante as Barcelona drew at home to Getafe on Saturday and Real went on to draw with Valencia later on Sunday.

However, the Argentine boss claims the defeat was the “best thing that could happen” to his side and he is now looking forward to three exciting weeks.

Los Rojiblancos host Malaga and travel to Barcelona in their two remaining La Liga fixtures before they face Real in the Champions League final, and Simeone remains optimistic on their chances of landing an historic double.

“This defeat is the best thing that could happen,” Simeone is quoted as saying by AS. “We expect three weeks with very high intensity and emotion. It is the ideal time for men, for players. We expect three fantastic weeks.

“Yes, and we expect three weeks, including the game on May 24 [the Champions League final in Lisbon] to be fantastic,” he added. “We expect three finals and we have to focus on the first one, which is Malaga on Sunday.

“We have always maintained the same line and balance. We have always said that we played two powerful competitors and it’s difficult for them to lose matches.

“On this occasion we had to lose. Ahead is three weeks of excitement, pure football. Now the league is much more fun.”

Atletico Madrid are 2.53 to win the Champions League while Real Madrid can be backed at 1.57.