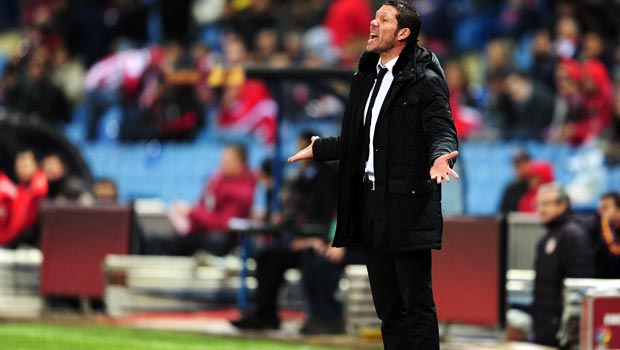 Atletico Madrid strengthened their hold on top spot in La Liga over the weekend but boss Diego Simeone remains guarded on their chances of securing the league title.

Atleti secured a 2-0 victory at Getafe on Sunday thanks to goals from Diego Godin and Diego Costa to open up a three-point gap at the top of the table.

Barcelona had been just one point behind the Madrid outfit prior this weekend’s round of fixtures but the Catalan giants slumped to a surprise defeat at Granada and are now four points adrift of Simeone’s side.

Real Madrid remain three points behind Los Rojiblancos after seeing off Almeria 4-0 but Atletico have a superior head-to-head record, meaning if the two sides finish on the same number of points at the end of the season the side from the Vicente Calderon will claim the title.

Simeone, however, insists nothing has been won yet and feels every game for his side is now a “final”, with Atletico next in action against Elche in Madrid on Friday.

“We have a final next Friday. The other thing I can comment on [the title] is fine, of course, it’s normal, but we have a final on Friday and we should focus on that,” Simeone told Marca.

“It’s changed from game by game for Atletico. Now it’s final by final.

“We did a great job in a tough game. It took a lot of effort and ambition by the players to get a significant result and this leads us to where we wanted to be for the last five games.

“Now we focus on Elche, the closest final we have. There’s no other thought but to prepare, rest, recover well and the players will face a final with Elche.”

Atletico Madrid are now priced at 2.10 to win the La Liga title, Real Madrid can be backed at 2.15 while Barcelona are 6.00.