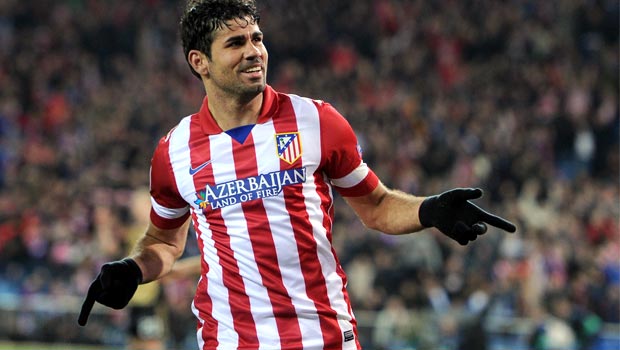 Atletico Madrid manager Diego Simeone has admitted that Diego Costa could leave the club this summer.

The striker has been in sublime form this season and his fine record has seen Chelsea, along with a host of other clubs, consider a summer bid.

Costa has scored 26 goals in 31 games for Los Colchoneros, which has helped the side move closer to a first league title since 1996. Atletico are currently priced at 1.99 to win the La Liga title, with rivals Real Madrid, lying in second three points behind, on offer at 2.15 and third-placed Barcelona, a further point adrift, at 5.50.

The Spanish international, who recently changed allegiances from Brazil, is wanted by a host of European clubs, but Chelsea appear to be the front runners.

Atletico’s squad could be picked apart next season with Thibaut Courtois set to return to Chelsea, while David Villa has also been linked with a move away.

Simeone is used to selling his best players, as he let Radamel Falcao leave for Monaco last year, and he admits that he may have to do the same again this summer.

“It will depend on him and what he thinks is best for his future,” Simeone told radio station Onda Cero.

“I will support any decision he makes. It’s natural that Chelsea are interested in him and that makes me happy, because my aim and that of my coaching staff is to see our players improve.

“We understand that Chelsea have huge financial power and if he wants to live off football for the rest of his life, I will have no problem in him going.

“It was like Radamel Falcao – how could I tell him not to go to Monaco? He gave life to this club.”