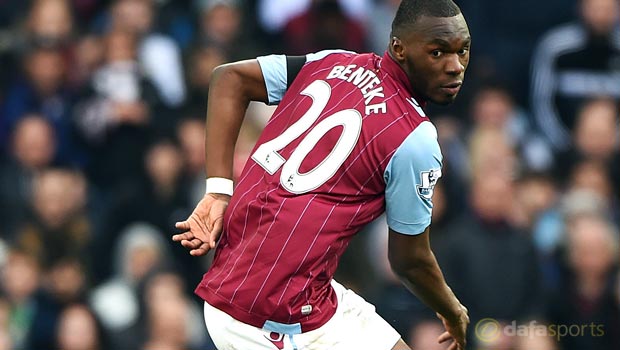 Aston Villa manager Tim Sherwood insists the club are doing everything they can to keep hold of Christian Benteke amid reported interest from Premier League rivals Liverpool.

The Belgium international is one of the most sought-after players this summer after playing a crucial role in helping the Villans stave off relegation last season.

The powerful striker bagged 13 goals in 29 Premier League appearances and eight of these came in the final two months of the campaign, a time when the club needed to pick up victories the most.

Benteke’s importance is highlighted even further when you look at the scoring stats from the 2012/13 season onwards, which has seen the 24-year-old notch 42 league goals, a return bettered only by Robin van Persie (48), Luis Suarez (54) and Sergio Aguero (55).

Liverpool are reportedly showing a keen interest in the striker and manager Brendan Rodgers is rumoured to be discussing the possibility of a player-plus-money deal.

Rickie Lambert, who joined the Reds last summer, has failed to fire and the England international could be offered, along with £28million, to land the Villa star.

Sherwood is desperate to keep hold of Benteke though and the former Spurs boss is not thinking about selling the Belgian in the current transfer window.

“We want Christian here,” he told Sky Sports News HQ. “We want to keep our best players and Christian is certainly one of those.”

Villa, who finished 17th last season, open their Premier League campaign with an away trip to newly-promoted Bournemouth, who are 2.25 to get relegated.

The Villans are outsiders to pick up all three points at 3.40 while the hosts are favourites at 2.20 to start their debut term in the top-flight with a victory.