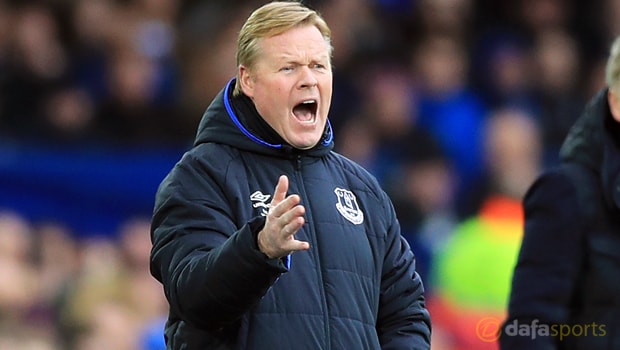 Everton defender Ashley Williams wants boss Ronald Koeman to remain at the club despite speculation linking the Dutchman with Barcelona.

Koeman took over the managerial reigns at Goodison Park last summer and has enjoyed a successful debut campaign at the club, as Everton currently sit seventh in the Premier League.

The 53-year-old’s impressive start to life on Merseyside has seen him linked with the managerial post at Barcelona that will become vacant when Luis Enrique departs in the summer.

Koeman enjoyed six successful years at the Camp Nou as a player during the 90s, winning 10 major honours, and could be tempted by a return to Catalonia.

One man who is desperate for Koeman to remain at Everton is Williams, who believes the former Southampton boss is building something special at the Toffees.

“For me personally and the lads, we obviously hope he stays,” Williams said.

“He’s started building a team here and we’re all confident the future looks good for Everton, so from our point of view we’d obviously want him to stay.”

The Wales international admits he is unsure if Koeman would be able to turn down a move to Barca although he remains hopeful the Dutchman will decide to see out his current project.

Williams added: “I can’t speak for what he wants from his managerial career but just from our point of view, definitely we enjoy working with him.”

Everton are next in action when they host West Bromwich Albion in the Premier League on Saturday.