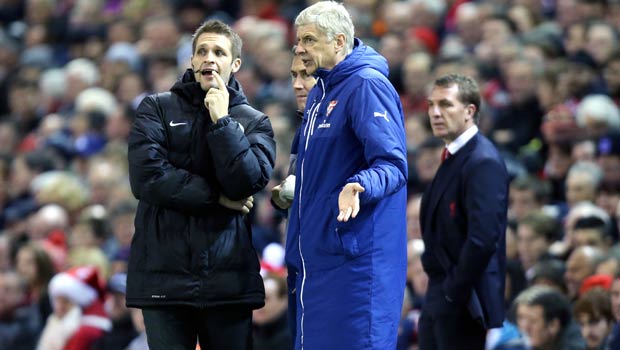 Arsene Wenger admits Arsenal were nowhere near good enough in Sunday’s draw at Liverpool and has blamed bad memories of a 5-1 defeat there last season.

The Gunners were thrashed at Anfield in February and looked a shadow of their usual selves on Merseyside yesterday as they drew 2-2 in a poor performance.

Arsenal only created a season-low six chances during the game and had just 37 per cent of possession – their lowest recorded figure in a Premier League match since Opta started in 2003.

“Maybe bad memories from last season, that played a part,” Wenger told a post-match press conference. “We had problems today to get our flow going. We didn’t have enough possession in the game. In the first half I felt it was down to tactical and psychological reasons.”

Arsenal fell behind in the first half to Philippe Coutinho’s opening strike before Mathieu Debuchy headed in a free-kick to equalise two minutes later.

Olivier Giroud then put the north Londoners ahead, but they were unable to hold on for all three points as Martin Skrtel headed in a 97th minute equaliser.

Wenger admits his team did not attack or defend well enough and he was left frustrated to have conceded the late equaliser from a set piece.

“We played with three strikers, plus Oxlade-Chamberlain and Cazorla – that’s basically five offensive players and I felt that we didn’t create enough today,” Wenger added.

“We conceded a corner which was a bit unlucky and where we were guilty, we didn’t jump at all with Skrtel on the corner and from then on we conceded 2-2.”

Arsenal will look to return to winning ways when they host Queens Park Rangers at the Emirates Stadium on Boxing Day and are priced at 1.25 to take all three points.