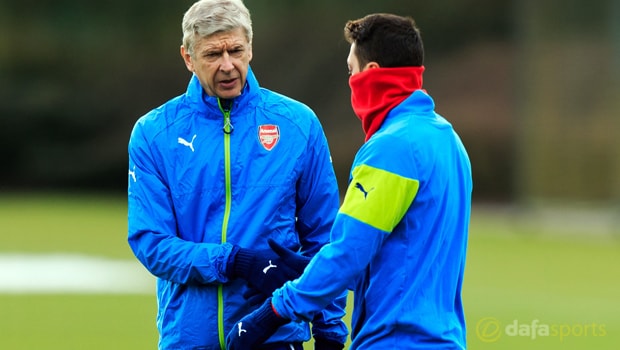 Mesut Ozil says he is willing to sign a new contract at Arsenal but the attacking midfielder admits the future of manager Arsene Wenger will play a big part in his final decision.

Ozil, who arrived at the Emirates in 2013 from Real Madrid, only has 18 months remaining on his contract and there are major worries he will decide not to extend his stay at the English club.

The Germany international has been an integral part of the first team since joining the Gunners and he has made 100 Premier League appearances, scoring 20 goals in the process.

His impressive performances have been well-noted by a number of top European teams and there are reports suggesting a move away in the summer could be on the cards.

However, the 28-year-old has revealed he is enjoying his life at Arsenal and would be more than happy to sign an extension if the club decide to meet his demands.

Wenger’s future as manager also looks like it will play a big part in Ozil’s choice with the French tactician’s current deal expiring at the end of the campaign.

The attacking midfielder wants reassurances on who will be in charge for next season and then the possibility of him signing a new contract will likely edge closer.

“The club knows that I am here most of all because of Arsene Wenger,” Ozil said in an interview with Kicker.

“He is the one who signed me and he is the one whose trust I have. The club also knows that I want to be clear what the manager is going to [do in the future].”

Arsenal, who are 15.00 to win the league this term, are back in action on Saturday when they travel to relegation-threatened Swansea City, who are now managed by Paul Clement.

The hosts are quoted 7.00 to win the match, the draw is priced at 4.50 while the visitors are the 1.50 favourite to clinch all three points at the Liberty Stadium.