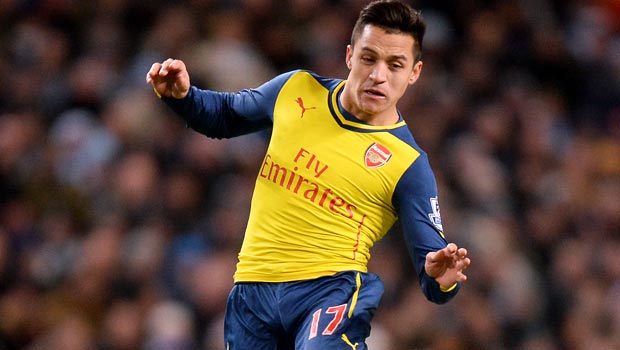 Arsenal will again be without key forward for Saturday’s north London derby against Tottenham, but Danny Welbeck is available for selection.

Sanchez, who has been a revelation since joining the Gunners from Barcelona last summer, sat out Sunday’s 5-0 win over Aston Villa with a hamstring strain and will again be absent when Arsene Wenger’s side go to White Hart Lane for Saturday’s early kick-off.

The boss is hopeful that the Chile star will be back for the clash with Leicester City on Tuesday.

Wenger told the club’s website: “Alexis is not ready. He is not far away, the Leicester game is a possibility. He is of course very difficult to keep quiet. He is training, but it’s light training.”

England forward Welbeck is in line to make a return after being out since December 28 with a thigh problem.

It remains to be seen if the former Manchester United man will be drafted straight back into the starting line-up as the Gunners look to dent Spurs’ bid for a top-four Premier League finish and enhance their own claims of securing Champions League football once again with another win.

Jack Wilshere remains on the sidelines for Arsenal after a difficult week for the midfielder.

The 23-year-old has been embroiled in another smoking row after pictures emerged on social media of him apparently holding a shisha pipe on a night out.

The Gunners are reportedly looking into the circumstances but Wenger is expected to remind Wilshere of his responsibilities after twice being pictured with a cigarette in the past.

He will play no part in the derby as he is still recovering from ankle surgery but Wenger has indicated recently that he expects the England star to be back in full training next week, with a view to making a first-team comeback by the end of February.