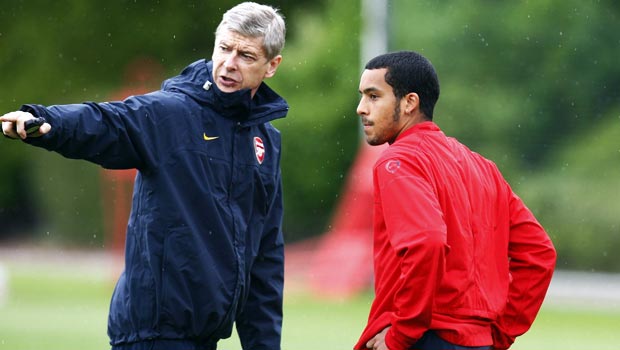 Arsenal winger Theo Walcott has dismissed reports suggesting there has been a bust-up between himself and manager Arsene Wenger over his proposed new contract.

The England international’s current deal runs out at the end of the 2015-2016 season and there are doubts over his long-term future with the Gunners.

Injuries have limited Walcott’s appearances this season and the 26-year-old has made just 13 outings for Arsenal following his return from nearly 10 months out with a knee injury.

The long absence of Walcott has forced Wenger to delve into the transfer market over the past couple seasons and the likes of Alexis Sanchez, Mesut Ozil and Danny Welbeck have all arrived at the Emirates.

The competition for places is certainly very high at Arsenal and the lack of first-team opportunities could force the Englishman to look elsewhere this summer.

There also seems to be some confusion regarding contract talks with Wenger saying discussions have started but Walcott insists nothing has been said between player and club.

“Reports about contract demands and bust-ups with the boss are complete nonsense,” the winger said. “There have been no contract talks as yet and my current focus is on doing my best for Arsenal.”

Arsenal return to Premier League action on April 4 when they welcome Liverpool to the Emirates after the international break.

The Gunners are currently third in the table, just one point behind second-placed Manchester City and seven adrift of leaders Chelsea and they are next in action after the international break when they host Liverpool.

A win for Arsenal could see them cut the gap to the Blues and they are favourites at 1.84 to defeat a Liverpool side still reeling from the 2-1 loss to Manchester United.

The Reds are now five points adrift of the Red Devils in fourth and Brendan Rodgers’ men are a 4.26 shot to defeat the Gunners.