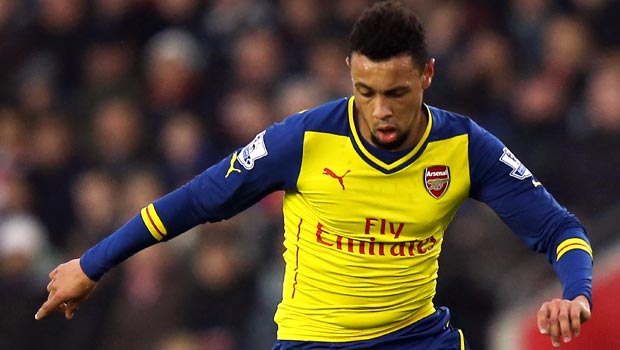 Arsenal winger Alex Oxlade-Chamberlain has praised team-mate Francis Coquelin’s impact on the side since his return to the first-team squad.

The Frenchman spent the early part of the season on loan at Championship side Charlton as well as spending the last campaign at Bundesliga side Freiburg.

Coquelin returned to the Emirates Stadium from The Valley in mid-December and has gone on to feature in the Gunners’ last nine matches in all competitions, a sequence that has seen Arsene Wenger’s side lose only once.

The 21-year-old was particularly impressive during his side’s surprise 2-0 victory over reigning champions Manchester City at the Etihad Stadium on January 18, cementing his place in the heart of the Gunners’ midfield.

Now Oxlade-Chamberlain has singled out the Frenchman for particular praise, believing his time in the Arsenal first team has finally arrived.

He said: “He’s been really patient and I’m sure there’s been tough times for him since he’s been at the club. I know everyone here has always known what a talent he’s been, it’s just been a case of the numbers and the type of personnel that we’ve had. It can be hard.”

The England international believes the midfielder, who also had a spell on loan at Ligue 1 Lorient, has benefitted from his time away from the Emirates, both in England and abroad.

He added: “Since he’s come back, he’s taken his opportunities, he’s taken his chances to show how good he is and now I see him as a big part of our team. He is a really influential and key part to our success”

Next up for the Gunners is a home match with Aston Villa on Sunday.

The hosts are 1.25 favourites to win against a struggling Villa side, with the visitors available at 11.34. The draw is at 5.50.