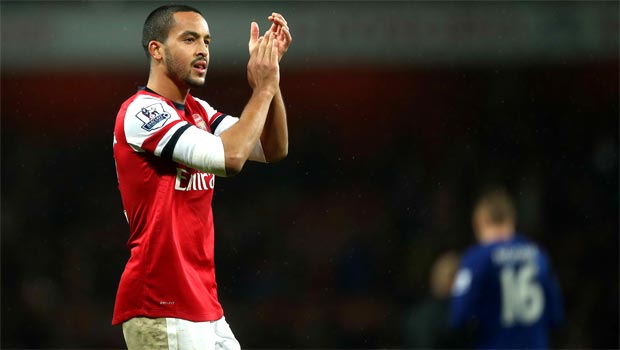 Arsenal winger Theo Walcott has continued to step up his recovery after suffering a season-ending cruciate ligament injury in Arsenal’s 2-0 win over Tottenham in the FA Cup in January.

The England international is walking again seven weeks after injuring his knee at the Emirates Stadium. Walcott originally looked to have picked up a minor knock but scans later that week revealed the true extent of the problem.

The injury was a bitter blow to Arsene Wenger’s plans, as well as to Walcott himself who was expected to start for England in this summer’s World Cup.

He was left out of Fabio Capello’s World Cup squad in 2010, and was an un-used member of the squad in Germany in 2006. Despite the latest disappointment, Walcott has insisted that he wasn’t interested in risking his future by rushing back too early.

“It has taken me a while to get the walking right, but it is nearly there,” he said.

“At the moment, I am taking it week by week and trying to hit targets. I can’t do much yet. I don’t want to be pushing the injury and not be 100 per cent and cause other injuries.

“I was never tempted by any of the offers from people saying they could get me fit for the World Cup. I followed the club’s advice. I went to a consultant in London and it was a great decision.

Despite losing Walcott, the Gunners are still very much in the title race and are currently priced at 7.75 to lift the Premier League trophy in May, with Manchester City the favourites at 2.30, just ahead of Chelsea at 2.35.