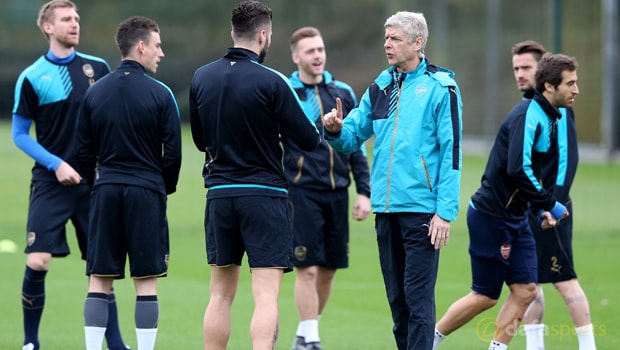 Arsene Wenger has hailed the news that Olivier Giroud, Laurent Koscielny and Francis Coquelin have all signed new long-term deals with Arsenal.

Wenger labelled the trio “important members” of his team as he confirmed they are now committed to the Emirates Stadium for the long term.

The Arsenal boss sees his own contract with the club expire this summer, with no updates from either Wenger or the Arsenal hierarchy on the likelihood of his two-decade tenure being extended.

Arsenal are also under scrutiny as speculation mounts on the futures of Alexis Sanchez and Mesut Ozil in North London.

For now, Wenger is just happy to have made certain that Giroud, Koscielny and Coquelin will be at Arsenal for the foreseeable future.

“We are very pleased that three important members of our team have committed to us for the long term,” said the Gunners boss.

French marksman Giroud has returned to the Gunners’ starting line-up in recent weeks, scoring in his last four outings, and his experience is vital, says his manager.

“Olivier has big experience in the game now and has become a more and more complete player since joining us,” he added.

Wenger feels that both Coquelin and Koscielny are growing their respective reputations with each passing season and he is delighted to retain their services.

“Francis has made tremendous technical strides over the past few years because he’s so focused every day,” he said.

“Laurent is of course a key part of our squad and I believe one of the best defenders in the world today. So overall, this is great news for us.”

Arsenal are 1.75 to finish in the top four this season, while the Gunners are 15.00 to end their wait for a Premier League title.