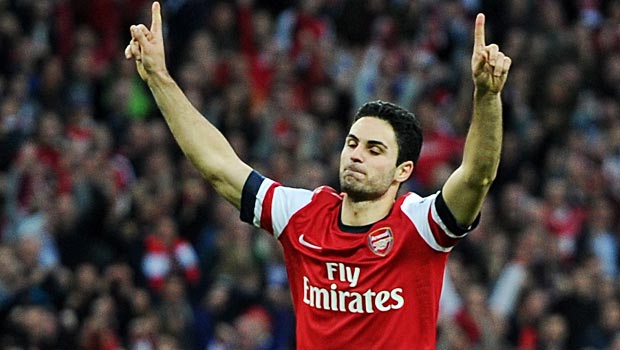 Arsenal midfielder Mikel Arteta feels his side have an “unbelievable opportunity” to end their trophy drought after reaching the FA Cup final.

The Gunners managed to see off Championship side – and holders – Wigan Athletic on penalties on Saturday in the semi-finals after a hard-fought 1-1 after extra time.

The Latics went ahead through a Jordi Gomez penalty after Per Mertesacker had brought Callum McManaman down inside the box just after the hour mark.

German defender Mertesacker went from villain to hero for the Gunners however, as his header eight minutes from time forced the game into extra time.

Arsenal eventually ran out 4-2 winners after penalties, with keeper Lukasz Fabianski making two saves in the shoot-out, and Arteta is convinced the current squad can secure the club’s first trophy since their FA Cup success in 2005.

“We’re really happy. It seems like at the moment we need to suffer and really earn things but I think we’ve done it,” Arteta told the club’s official website.

“We’ve got an unbelievable opportunity. We’ve got the hunger and I think we’ve got everything we need to do it. We don’t want to waste that opportunity and we’re going to do it now.

“To get in a final is never easy and you look at Wigan and how we had to fight to beat Spurs first which is really tough, then Liverpool, then Everton and then them. They [Wigan] beat Man City and were the better team on the day.”

Arsenal now take on Premier League rivals Hull City in the FA Cup final on May 17 after the Tigers secured a 5-3 semi-final win over League One outfit Sheffield United on Sunday.