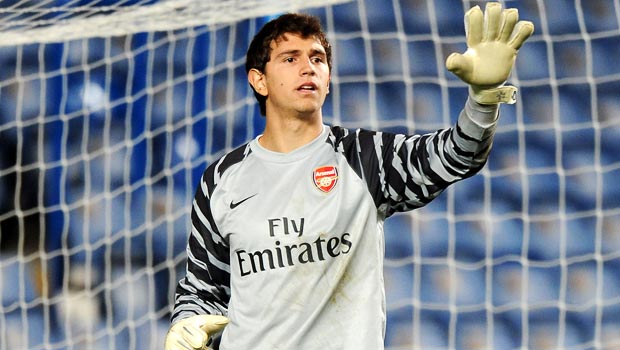 Arsenal boss Arsene Wenger says he has no concerns over throwing goalkeeper Emiliano Martinez into Champions League action this evening.

The Gunners take on Anderlecht in Belgium without the suspended Wojciech Szczesny, while Colombian keeper David Ospina is out with a thigh injury.

It means Wenger will have to turn to the inexperienced 22-year-old in the Constant Vanden Stock Stadium, but the Frenchman has no qualms about doing so.

Martinez has made just two senior appearances for the Gunners, both in the Capital Cup in 2012 and he conceded four goals in the 7-5 win at Reading.

Martinez did have a spell on loan at Sheffield Wednesday in the Championship last season and Wenger says that experience will have done him the world of good.

“(I am) extremely confident, because he has experience from Sheffield last year and when he played for us, he did very well. I have no special worry about that,” said Wenger.

“He is two years older now (than his last Arsenal match), has a good experience. He has grown in stature as well.

“We have to make sure that we make it as comfortable a night as we can for him, and that is by defending well as a team.”

Midfielder Jack Wilshere insists the squad have confidence in Martinez.

“He is in our dressing room now so we know him well. He is confident and has grown up quite a lot in the last two years. He learned from Sheffield, playing in a tough league, especially as a foreign keeper,” he said.

The Gunners are hot 1.79 favourites to win this evening with Anderlecht 4.73 to cause an upset, while the draw is 3.57.