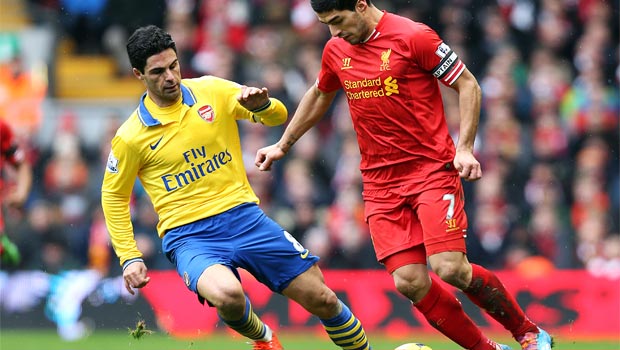 Mikel Arteta says Arsenal have to put the demoralising defeat against Liverpool behind them and get a positive result against Manchester United on Wednesday night.

The Gunners recovered well earlier this season after losing to United and Manchester City, but neither of those defeats were quite as bad as the 5-1 mauling that was dished out at Anfield.

A huge question mark now hangs over Arsenal’s title credentials but Arteta says they have enough quality in the side to bounce back and go on another run.

Following the defeat to City in December, Arsenal took 20 points from the next 24 available and the Spaniard says the same again is needed.

“We have had two big crises already,” he said.

“I think the Manchester United defeat was a different game to this, but City and this one are really hard to take. We have to react because there is nothing we can do about this now.”

Meanwhile Arteta also says he has never seen boss Arsene Wenger as mad as he was at half time at Anfield.

“We know we need to improve and face those games in a different manner because after 19 minutes we were 4-0 down and it was like a car crash,” he added.

“The manager was really upset at half-time, that’s normal because it wasn’t good enough for this football club. It was the angriest I have seen him.”

The good news for Arsenal is that Manchester United continue to struggle and were held to a 2-2 draw at home to Fulham on Sunday afternoon and it should hand the Gunners a great chance to bounce back.