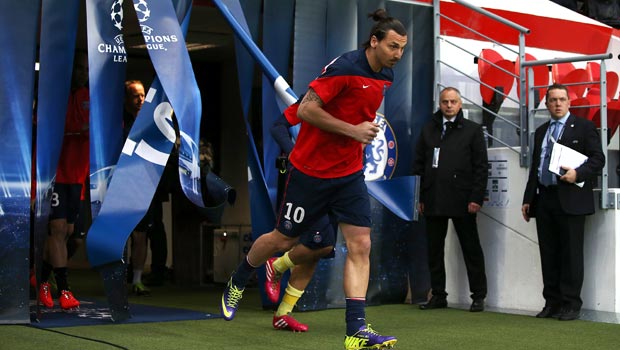 Paris Saint-Germain coach Laurent Blanc has confirmed striker Zlatan Ibrahimovic will not be ready to return in time for Wednesday’s Champions League clash with Apoel Nicosia.

The Swedish striker is recovering from a persistent heel injury and has not played since the 1-1 draw with Lyon in late September.

Blanc issued a positive update on his star man on Friday but he was not part of the PSG squad that came from behind to defeat Lorient 2-1 on Saturday night.

Victory over Apoel Nicosia in Paris this week would secure Blanc’s team a place in the Champions League knock-out stages if Barcelona avoid defeat in their clash with Ajax at the Amsterdam Arena.

With the Spanish giants suffering back-to-back La Liga defeats, PSG could be in with a great chance of top spot in Group F should the Catalans fail to win.

Blanc, however, has no desire to rush Ibrahimovic back into action to ensure the necessary result.

“We have waited four weeks, we can wait another week or 10 days,” he said. “Once there is no more pain, he can start to work more intensively.”

The French champions are heavy favourites at 1.19 for the clash with Apoel, with the Cypriots on offer at 13.19 to pull off a major shock.

Ibrahimovic scored 41 goals in all competition for PSG last season and will be crucial to their chances of improving on the Champions League quarter-final appearance, when they were knocked out by Chelsea on away goals.

Uruguayan striker Edinson Cavani has led the line in the absence of Ibrahimovic and scored the equaliser against Lorient on Saturday night before Jean-Christophe Bahebeck notched the winner to keep PSG on the tails of league leaders Marseille.