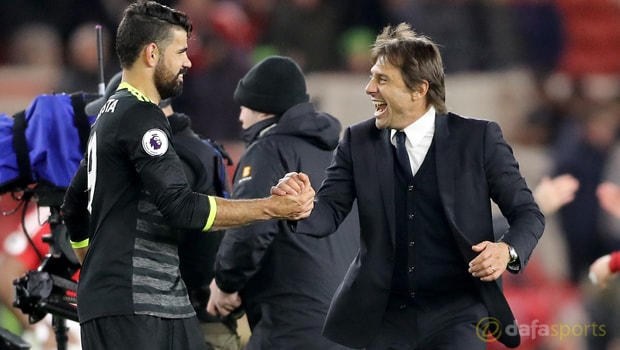 Antonio Conte singled out Diego Costa for praise after the striker netted the goal that sent Chelsea top of the Premier League.

Costa was on hand to rifle home from close range after a defensive mix-up to give Chelsea a 1-0 win over Middlesbrough at the Riverside Stadium.

It was a sixth straight league victory for the Blues, a run during which they have not conceded a single goal and they now lead the way by a point from Manchester City and Liverpool.

Costa’s winner on Teesside was his 10th of the season and his manager has been impressed with the 28-year-old’s form.

Conte says the Spanish international has answered the doubters that questioned his temperament in the past.

“For me, it’s important to have this type of question because in the past, you asked me about his behaviour, about his reaction, about his patience,” Conte said when asked about Costa’s impact.

“Now I think he is one of the best strikers in the world and he has to continue in this way, showing his patience, but in the right way.”

Costa is 3.00 to finish the season as leading scorer in the Premier League while Chelsea are 3.25 to be crowned champions.

Spurs are next up for the Blues at Stamford Bridge and former Italy boss Conte insists he is ready for the hectic festive period that is looming – his first experience of English football’s Christmas programme.

“We are ready, we are ready to play many games in few days because from the start of the season, we have worked a lot, not only on the tactical aspect, but the physical aspect,” Conte added.