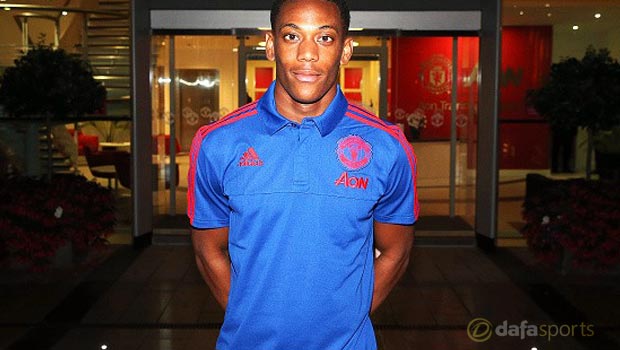 New Manchester United signing Anthony Martial says he is not concerned about size of the transfer fee involved after he secured a dream move to “the biggest club in the world”.

Following on from their purchase of Luke Shaw last summer, the Red Devils again shattered the record fee paid for a teenager in world football when they agreed to give Monaco £36m for the 19-year-old forward.

The fee could rise to as much as £58m depending on Martial’s success at United player, but he says he cannot allow himself to be weighed down by the scale of the fee involved.

“There’s certainly been a lot of talk about it (the transfer fee) but the most important thing will be on the pitch and to show people who I am. Football is football – it’s changed nothing,” he said.

Martial is excited about the prospect of playing under Louis van Gaal and he said he is fulfilling a dream by moving to the English top flight.

“I have always wanted to play in the Premier League and to join the biggest club in the world is what every young footballer dreams of,” he added.

“I am looking forward to meeting my new team-mates and working with Louis van Gaal, who has achieved so much in his career.”
Martial scored13 goals in 57 appearances for Monaco after joining from fellow Ligue 1 club Lyon.

He has been compared to a young Thierry Henry at Monaco and his performances were enough to catch the eye of French national team boss Didier Deschamps who called him into the senior squad.

However, Deschamps has questioned his ability to play as an out-and-out centre-forward, as Martial “often drifts into wide positions” during games.

Martial could make his debut for United against Liverpool on September 12 at Old Trafford, a game Van Gaal’s team are 2.00 to win.