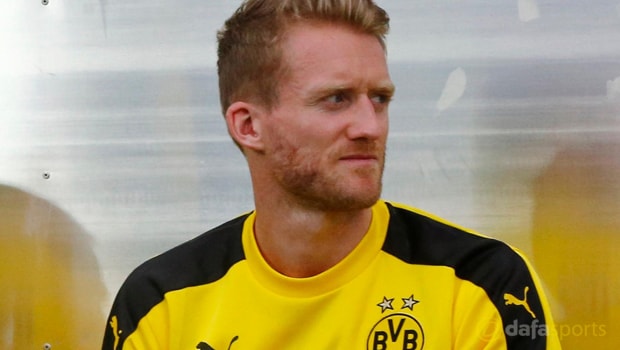 Andre Schurrle is adamant Borussia Dortmund will make the quarter-finals of the Champions League despite losing 1-0 to Benfica on Tuesday.

Der BVB headed to Lisbon hoping to become only the second away team to win at the Estadio Da Luz this season and they dominated long spells of the game.

However, Kostas Mitroglou’s 48th-minute goal made the difference, with Pierre-Emerick Aubameyang especially guilty of spurning opportunities for Dortmund, most notably having a penalty saved by Ederson just before the hour mark.

Thomas Tuchel’s men have struggled for rhythm at times this season and the defeat in Lisbon was their second in a row after going down at Darmstadt on Saturday.

With the Bundesliga seemingly out of their grasp, Europe could be Die Schwarzgelben’s salvation and they are 15.00 to win the Champions League outright.

The German club beat Juventus to win the competition in 1997 and reached the final in 2013, only to go down to old rivals Bayern Munich.

Schurrle insists Tuesday’s defeat does not mean the end of their European adventure and is in no doubt they will be able to turn the last-16 tie around next month on home soil.

“I think we played better, especially in the first half, we had the better opportunities,” Schurrle told UEFA.com.

“Especially with the penalty, we should have won.

“There is a return leg and we will show that we were clearly better then and go through. We were clear through on goal and things didn’t work out. Such days happen.”