Posted by Fred McKinley on September 2, 2014 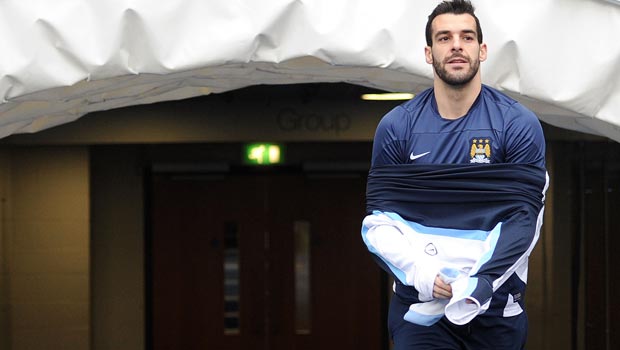 Manchester City striker Alvaro Negredo has returned to his homeland Spain by joining Valencia on a season-long loan deal.

Los Che also have an obligation to make the deal for the 29-year-old permanent at the end of the season.

Nicknamed ‘The Beast’, Negredo forged his reputation as a marauding centre-forward when scoring 23 goals in his debut season in England in a potent strikeforce alongside Argentina livewire Sergio Aguero.

Negredo is currently out injured with a broken foot and has not played a competitive fixture since the 4-0 win against West Ham at the back end of last season.

His form dipped badly at the start of the calendar year and he failed to score in the last 16 games of the campaign.

The Primera Division club revealed they hope to unveil the former Real Madrid and Almeria targetman at Estadio de Mestalla on Tuesday.

“Valencia CF wish to express their happiness with the signing and repeat the invitation to all Valencianistas to welcome Alvaro Negredo to Mestalla,” an official club statement added.

But it was in a four-year spell with Sevilla, which yielded 71 top-flight goals, where he earned his reputation as one of the most feared strikers in continental Europe.

His prolific form earned him a big-money move to the Etihad Stadium in 2013 but his lack of goals towards the end of last season meant he missed out on a place in the Spain squad for the World Cup finals in Brazil this summer.

Manchester City are currently priced 15.00 with Dafabet to win this season’s Champions League.