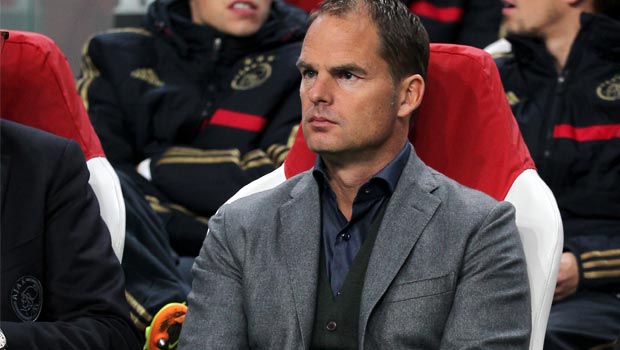 Ajax manager Frank de Boer has stated that he would want to move to Liverpool when he leaves the Amsterdam club rather than old club Barcelona.

The former Holland captain has been at the Amsterdam Arena since December 2010 and looks set to guide the club to a fourth Eredivisie title, with his side currently six points clear at the top with three games to go.

The Dutchman’s success in Holland has not gone unnoticed by other European clubs, with both Inter Milan and Tottenham being linked to the manager.

And although Tito Martino has not had a bad campaign with Barcelona, who are 2.20 to win the Champions League and 1.75 favourites to win La Liga – rumours about his long-term future at the Nou Camp abound.

After a four-year playing career with the Spanish giants, many are claiming that De Boer is the perfect man to take over one day.

However, it seems the 43-year-old has put the rumours to bed by stating that Anfield would be his preferred destination as he believes that is where he can make the biggest difference.

“It would be fun for me to go to Liverpool because it is a team that, despite the great work done by (Brendan) Rodgers and the results, you can always improve,” he told Voetbal Primeur.

“Coaching Barca? Do you really believe that I can teach something to them? To players like Neymar, [Lionel] Messi, [Andres] Iniesta and Xavi?”

However, with Liverpool manager Brendan Rodgers just five games away from the Premier League title it seems De Boer will be waiting for some time before he could even apply for the job.