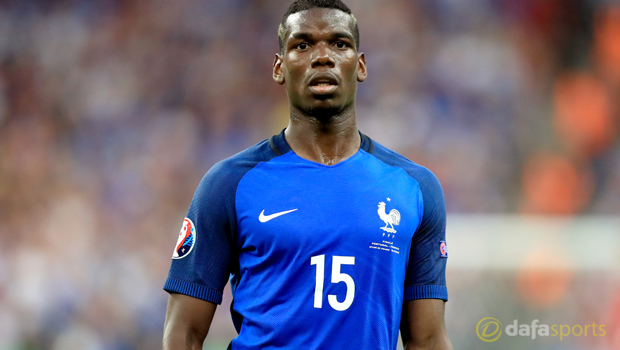 Paul Pogba’s agent says the player is happy to stay at Juventus but has refused to rule out the possibility of a transfer amid interest from Manchester United.

The midfielder was hugely influential in helping hosts France make the final of Euro 2016 and was linked with potential deals to take him away from Turin throughout the tournament.

Real Madrid, Barcelona and Paris Saint-Germain have been mentioned as potential suitors but it is his former club United who appear to be leading the race.

Pogba left United for Juve in 2012 following a lack of first-eam opportunities, but recent reports have suggested the Red Devils could be prepared to pay a world record fee of around £100m to tempt the 23-year-old to return to the Premier League.

Having already sold Alvaro Morata back to Real Madrid this summer, Juve – who are 1.50 to win a sixth straight Serie A crown – are understandably keen to keep their man.

The player’s agent, Mino Raiola, who recently saw another client, Zlatan Ibrahimovic, move to Old Trafford, says the midfield dynamo is happy in Turin but has refused to rule out the possibility of a transfer to either United or another of Europe’s big clubs.

“Juve don’t want to lose Pogba, they want him to stay for a long time and we’ve discussed a renewal,” he told Sky. “And he doesn’t feel that he wants to leave Juventus. We’re calm.

“Will he stay then? We don’t rule anything out, not even a transfer to another club, because the transfer window is long, it closes in September.

“I’m not ruling out a sale or a renewal. Between Raiola and every club in the world there’s an open channel, not just Manchester United.”